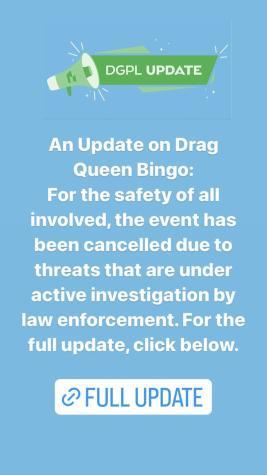 During the final week of August, the Downers Grove Public Library (DGPL) announced that it would be holding a Drag Queen Bingo event for teens on Oct. 11, 2022 to celebrate National Coming Out Day. On Sept. 12, the library released a statement on their website and social media platforms announcing that the event had been canceled due to threats of violence and large amounts of local pushback in response to the event. Law enforcement is actively investigating the violent threats.

“It is our responsibility to keep you safe. We are disappointed and saddened by some of the vitriolic feedback that we received for what was meant to be an evening of fun and celebration of self-identity and self-expression,” Library Director Julie Milavec said.

Prior to the event’s cancelation, the library planned to have drag queen Aurora Divine call bingo numbers for the participants, and then perform “Firework” by Katy Perry. There were 40 spots available to attend this event, and by the time it was canceled, the registration was full, and the waiting list was capped at 80 registrants, according to DGPL Public Relations Manager Cindy Khatri.

Senior Kate Snouffer was hoping to attend the event but was not able to reserve a spot due to the registration quickly filling.

“I knew there would be some backlash to it, but I never expected it to [be] canceled. It was disappointing to see so many people not [being] supportive of them when it doesn’t affect them at all,” Snouffer said.

One of the main groups opposing the Drag Queen Bingo event was Awake Illinois, a conservative political group based in the Chicago suburbs. The main argument of those opposed to the event is that having a drag queen perform for teens is sexual in nature, and inappropriate for the targeted age range. On the Awake Illinois website, they have released a blog post urging the church to take a stand against this event and others like it.

“What is happening around this country is evil. It is evil coming after our children. You can love your gay neighbors and also recognize this is evil incarnate,” Becky Weiss posted on Awake Illinois.

An anonymous junior agreed with the cancelation of the Drag Queen event, but also believes that the violent threats were not the way to go about preventing the event from happening.

Aurora Divine is a drag queen based in the Chicago area, and performs in bars as well as family-friendly events. They countered the argument that the drag queen event at the library would be inappropriate, and described how this event would not be the same as a typical drag queen show.

“We cater to what the audience wants… If it is a family-friendly event, of course we would change how we are perceived. I would [wear] more modest clothing… there’d be no foul language,” Divine said.

In addition to this event causing a divide between community members, this controversy has also grown to be a source of dispute between Illinois Representative Sean Casten, and his opponent in the upcoming election, Orland Park Mayor Keith Pekau.

On Aug. 29, Pekau released a statement condemning the event, calling it “inappropriate” and “an unacceptable use of taxpayer funds.” At the end of the statement, Pekau urged Casten to denounce it as well.

“I join parents across the district in denouncing this event, just as I would denounce a library introducing kids to straight sex by holding a burlesque show. To be clear, I have no interest in regulating the private, consensual activities and decisions of adults. This event, however, targets children,” Pekau said.

Casten released a public statement on Sept. 13 voicing his support for the DGPL and the Drag Queen event in response to the cancellation and Pekau’s comments.

“I’m incredibly disheartened to hear that the Downers Grove Public Library is canceling their upcoming event — one meant to celebrate self-identity and self-expression — because Keith Pekau and Awake Illinois created an unsafe environment in our community. They should be ashamed of themselves. They have used their platform to promote hatred, homophobia and bigotry,” Casten said.

Despite all of the negative pushback, the DGPL has also received support from the community according to Khatri.

Although negative feedback gets a lot of press, there has been an incredible amount of support from Downers Grove community members, area neighbors and people from all over the country. Many local community leaders and organizations have reached out to show their support,”

“I had a parent reach out to me, thanking me for bringing this to Downers Grove. Another one said, ‘I wish this would have been there when I was growing up,’” Divine said.

Divine went on to add that events that promote diversity and inclusion are important to help people understand each other and help decrease isolation, especially among kids and teens.

“I was one of those kids in a small town, and if you didn’t drive a tractor or a pickup truck to school, you were different. So if I would have had this when I was younger, it would have absolutely helped me change my mind and help the community,” Divine said.

The singer, who declined to perform in the 2019 Super Bowl halftime show out of solidarity with Colin Kaepernick, will headline the 2023 Super Bowl, the NFL announced Sunday along with Jay-Z’s Roc Nation Read more…

Kelsea Ballerini is taking liberties with her own hit songs. While performing at her New York City concert on Saturday, the 29-year-old country artist swapped a few of her lyrics to better reflect her Read more…

As well as being a one-of-a-kind drag artist, Cherry Valentine knew exactly how to shut down anti-drag arguments with class. The drag icon’s family – whose real name was George Ward – tragically passed Read more…