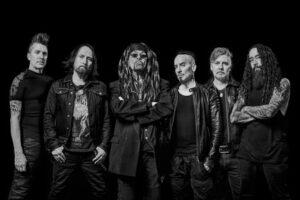 With NIN In Cleveland & Louder Than Life Festival
To Offer Set List of Classic Hits & New Tracks From
Latest Album Moral Hygiene
Ministry has one more surprise planned for fans this year, announcing the act’s first-ever livestream to be hosted on streaming platform HITKOR. Featuring the full band and possible special guests, the show will take place November 20 at 3 pm PT/5 pm CT/6 pm ET/10 pm GMT and will feature classic hits from the band’s 40-year history as well as new tracks from the latest album, Moral Hygiene, out now on Nuclear Blast Records.
The special streaming event will be available in more than 30 countries and was planned with European Ministry fans in mind after the band had to regrettably cancel a multi-country tour this fall due to unforeseen circumstances.
Frontman and creator of Ministry Al Jourgensen says, “We never intended for Cleveland with NIN to be our last show this year. Due to circumstances beyond our control we had to cancel Europe but we didn’t want to end 2022 without one last show, and this will be one for the books.”
Tickets are on sale now and available only at HITKOR.com. LIVE tickets are
$17.99 (to both stream live and watch on demand). ALL ACCESS passes are $19.99 and include the stream plus bonus, behind-the-scenes content prior to the main show, as well as an exclusive interview with Ministry.
Purchase tickets at: https://www.hitkor.com/shows/ministry-industrial-strength
Ministry is fresh off the road, appearing with Nine Inch Nails and Nitzer Ebb for a once-in-a-lifetime show in Cleveland as well as Louder Than Life festival in September. In April, the industrial stalwarts wrapped up the much-anticipated Industrial Strength Tour that celebrated the 30th anniversary of landmark album The Mind Is A Terrible Thing To Taste, receiving some of the best reviews of their career.
Ministry by Derick Smith
“The Industrial Strength Tour … was nothing less than extraordinary, complete with an ode to their early tours” –Outburn
“It’s shows like this that restore faith in unadulterated music” —The Vinyl District
“Out of all the incarnations of Ministry throughout the years, this could be the tightest unit musically in the band’s illustrious career” —Splice Magazine
“This was a show as unique as its frontman, shrugging off many conventions in favor of a performance that truly fit Ministry’s legacy. …The hunger for this tour was evident, and made this unforgettable headlining set even stronger” —Bravewords
“As someone who’s seen Ministry many, many times in his life, I’ll say this show was different. The classic tracks had a renewed feel and sound and worked really well. From the audience reaction, this was a good combination” —In The Loop
“Ending with new material, it was clear the band hasn’t lost its touch. The chugging, siren-sounding guitars, machinelike drumbeats, electronic noises and Jourgensen’s raspy talk-box vocals seemed to embody the state of the world today as accurately as they did during the ’90s” —San Antonio Current
“These guys aren’t going anywhere, and the music world’s a better place because of it” —Glide Magazine
In addition to creator and founder Al Jourgensen, Ministry’s full band will appear in the livestream show, including drummer Roy Mayorga (Stone Sour, Soulfly, Nausea), guitarists Cesar Soto (Man The Mute) and Monte Pittman (Madonna, Prong), bassist Paul D’Amour (Tool, Feersum Ennjin), and keyboardist John Bechdel (Killing Joke, Fear Factory).
As well as classic hits, some of the night’s set list will include material from Moral Hygiene, Ministry’s 15th studio album that features some of the project’s strongest and most inspired material to date. It’s the creative masterwork of founder and creator Jourgensen who spent the pandemic pause ruminating on the new world we as a society have found ourselves in – while pondering just what we are going to do about it.
The 10 tracks are a societal manifesto and plea for civilization to get back to a set of standards that lives up to and embraces our humanity. Previous singles have included “Alert Level” (sounding the alarm on the state society is in), “Good Trouble” (a rallying cry to fight for human rights in homage to Civil Rights leader John Lewis), “Disinformation” (the dangers of consuming mass media without critical thinking) and “Search And Destroy” (the unique take on The Stooges classic). The latter features guitar virtuoso Billy Morrison (Billy Idol/Royal Machines) who is also heavily featured on a number of songs on the album.
Moral Hygiene is available now through Nuclear Blast Records in CD, vinyl and digital download formats at the following links:
Record label store: https://label.nuclearblast.com/ministry-moralhygiene
Stream Moral Hygiene here: http://nblast.de/MinistryMoralHygiene
ABOUT MINISTRY
Born in 1981 in Chicago, Ministry has been the lifetime passion project of founder Al Jourgensen, considered to be the pioneer of industrial music. In its early days, Ministry was identifiable by its heavy synth-pop material in line with the new sounds and technology that were being developed in the ‘80s. Ministry’s output began with four 12” singles on Wax Trax! Records in 1981 before the first LP With Sympathy in 1983 via Arista Records. As time progressed however, so did Ministry, quickly developing a harsher, and more stylized sound that the band soon became infamous for on seminal albums Twitch (1986), The Land of Rape and Honey (1988), and The Mind Is A Terrible Thing To Taste (1989). With the release of Psalm 69: The Way to Succeed and The Way to Suck Eggs (1992), Ministry hit an all-time high in the mainstream musical realm and received its first Grammy nomination. In total, Ministry has been nominated for a Grammy award six times. Eight more albums would follow before an indefinite break in 2013, only to be unearthed again in 2018 with AmeriKKKant, continuing to reflect Jourgensen’s views on the frightening state of society and politics. The band’s latest effort, Moral Hygiene, came out October 1, 2021 on Nuclear Blast Records, ahead of upcoming tours planned for 2022.
Categories: ENTERTAINMENT