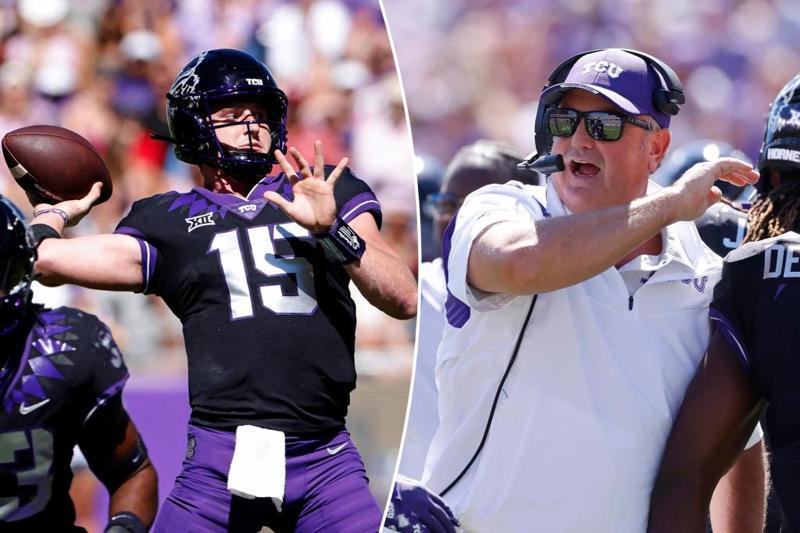 Learn the name Sonny Dykes. Google Max Duggan. It’s time to get to know the contender nobody saw coming.

TCU, picked to finish seventh in the Big 12, unranked entering the weekend, coming off a five-win season and with a new head coach, emphatically announced itself as a threat Saturday afternoon.

The Horned Frogs didn’t just beat Oklahoma. They emasculated the Sooners. They obliterated them, 55-24. They served notice to the rest of the Big 12 — and the country, as well — that Forth Worth, Texas, is home to one of the better teams in the nation.

Coming off a quality win at SMU, where Dykes engineered a significant turnaround with three straight bowl appearances, TCU took a mammoth leap forward. Duggan, the senior quarterback who is already halfway to his career-high in touchdown passes, threw for 302 yards and three scores and ran for another 116 yards and two more touchdowns. The Horned Frogs piled up 668 yards of offense, have scored at least 38 points in each of their first four games, and are 4-0 for the first time since 2017.

The 52-year-old Dykes inherited a program that was starting to become irrelevant, failing to win more than seven games in any of the past four seasons. It finished tied for ninth in the Big 12 last year, outscored by 73 points.

The roster is similar to what it was last fall, but the play at quarterback is drastically different. After freshman starter Chandler Morris suffered a knee injury in a season-opening rout at Colorado, Duggan entered the game and has taken off, completing over 74 percent of his passes. Against Oklahoma, he put on an absolute show, looking nothing like the underwhelming player from his first three seasons. He has yet to commit a turnover and against Oklahoma became the second player in the last 15 years with a 60-yard rushing and 60-yard passing touchdown in the first quarter, according to ESPN Stats and Info. The other player: Lamar Jackson.

Oklahoma, it should be noted, was coming off a seven-point loss to Kansas State, and star quarterback Dillon Gabriel suffered what appeared to be a head injury in the first half. TCU has more challenges ahead. First up is undefeated — yes, undefeated — Kansas followed by top-10 foe Oklahoma State and Kansas State. It’s early to say TCU is the team to beat in the Big 12. But it has been arguably the biggest surprise in college football, already owning two road wins and this statement victory over Oklahoma.

The only negative from this offensive outburst was that TCU couldn’t make good on its Twitter account’s trolling at halftime, when it tweeted: “Who hits 62 first? Like for TCU, RT for Aaron Judge.”

Neither hit the mark Saturday. There’s always next week for Dykes, Duggan, and Co. They certainly seem capable of putting up outrageous numbers.

Two weeks ago, I wrote that the real Clemson would reveal itself in its next two games, that we would find out if the Tigers had become just another program or if last year was merely an anomaly. I got my answer: Clemson is back.

First, it survived at Wake Forest in a double-overtime shootout behind five DJ Uiagalelei touchdown passes, and Saturday it overwhelmed N.C. State in Death Valley, limiting the Wolfpack to 34 rushing yards and forcing two turnovers. Uiagalelei wasn’t as dynamic as the previous week, but he produced three touchdowns (one throwing, two rushing) and hasn’t thrown an interception in his last 104 passing attempts.

The path is now clear for Clemson to run the table and return to the playoffs. Only two potentially tricky regular-season games remain: Visits to improved Florida State and .500 Notre Dame. Uiagalelei is only getting better and the defense, loaded with talent, showed its potential against N.C. State. Dabo Swinney’s team is a contender again.

USC has received all the hype, but UCLA has the most noteworthy victory by an LA school. Friday night, the Bruins improved to 5-0 for the first time in the Chip Kelly era after overwhelming Washington, 40-32, setting up an intriguing showdown against Utah, which has rebounded nicely from its Week 1 loss to Florida with four consecutive blowout victories.

It was poetic that one of the biggest victories for Kelly in Westwood came with quarterback Dorian Thompson-Robinson performing so well, throwing for 315 yards and producing four touchdowns. Thompson-Robinson has been UCLA’s quarterback since Kelly took charge — he was one of his first big recruits — and the two had yet to reach expectations together. That changed against the Huskies. Maybe it can continue.

What Is Web Advancement with Model

What Is Web Improvement Make sense of What Are the 7 Stages of Web Advancement? Web improvement has changed essentially throughout the course of recent years. For example, finding an organization that had practically zero Read more…

What’s New in the Airpods Firmware Update? How to check which firmware the Airpods have? How to Update the Airpods firmware? If you use AirPods to listen to music or keep up with a call Read more…